How hard can a compute Grid be

Limitation & challenge：1) each processor has to deal with loop overheads such as calculation of bounds, 2) test for loop completion 3) loop overhead acts as a further (serial) overhead in running the code. 4) Also getting data to/from many processor overheads.
Amdahl’s law assumes a fixed problem size. It cannot predict length of time required for some jobs. amdahl’s law 在实际使用中的问题Amdahl’s law applies only to the cases where the problem size is fixed. In practice, as more computing resources become available, they tend to get used on larger problems (larger datasets), and the time spent in the parallelizable part often grows much faster than the inherently serial work. In this case, Gustafson’s law gives a less pessimistic and more realistic assessment of the parallel performance

Gustafson’s law proposes that programmers tend to set the size of problems to fully exploit the computing power that becomes available as the resources improve. Therefore, if faster equipment is available, larger problems can be solved within the same time. The law redefines efficiency, due to the possibility that limitations imposed by the sequential part of a program may be countered by increasing the total amount of computation. 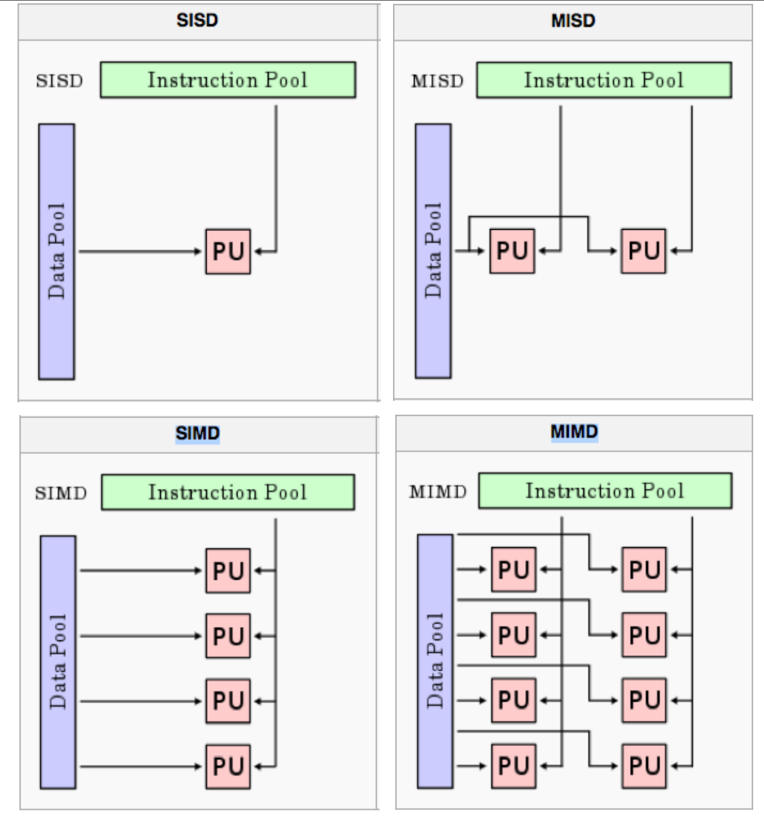 High­performance computing (HPC) is any computer system whose architecture allows for above average performance. A system that is one of the most powerful in the world, but is poorly designed, could be a “supercomputer”.

Clustered computing is when two or more computers serve a single resource. This improves performance and provides redundancy; typically a collection of smaller computers strapped together with a high­speed local network

The operating system and many applications are provided as “free and open source”, which means that not only are there are some financial savings, were also much better placed to improve, optimize and maintain specific programs. Free or open source software (not always the same thing) can be can be compiled from source for the specific hardware and operating system configuration, and can be optimised according to compiler flags. There is necessary where every clock cycle is important.

Why accuracy of walltime important

Cloud computing is a model for enabling ubiquitous, convenient, on-demand network access to a shared pool of configurable computing resources (e.g., networks, servers, storage, applications, and services) that can be rapidly provisioned and released with minimal management effort or service provider interaction. 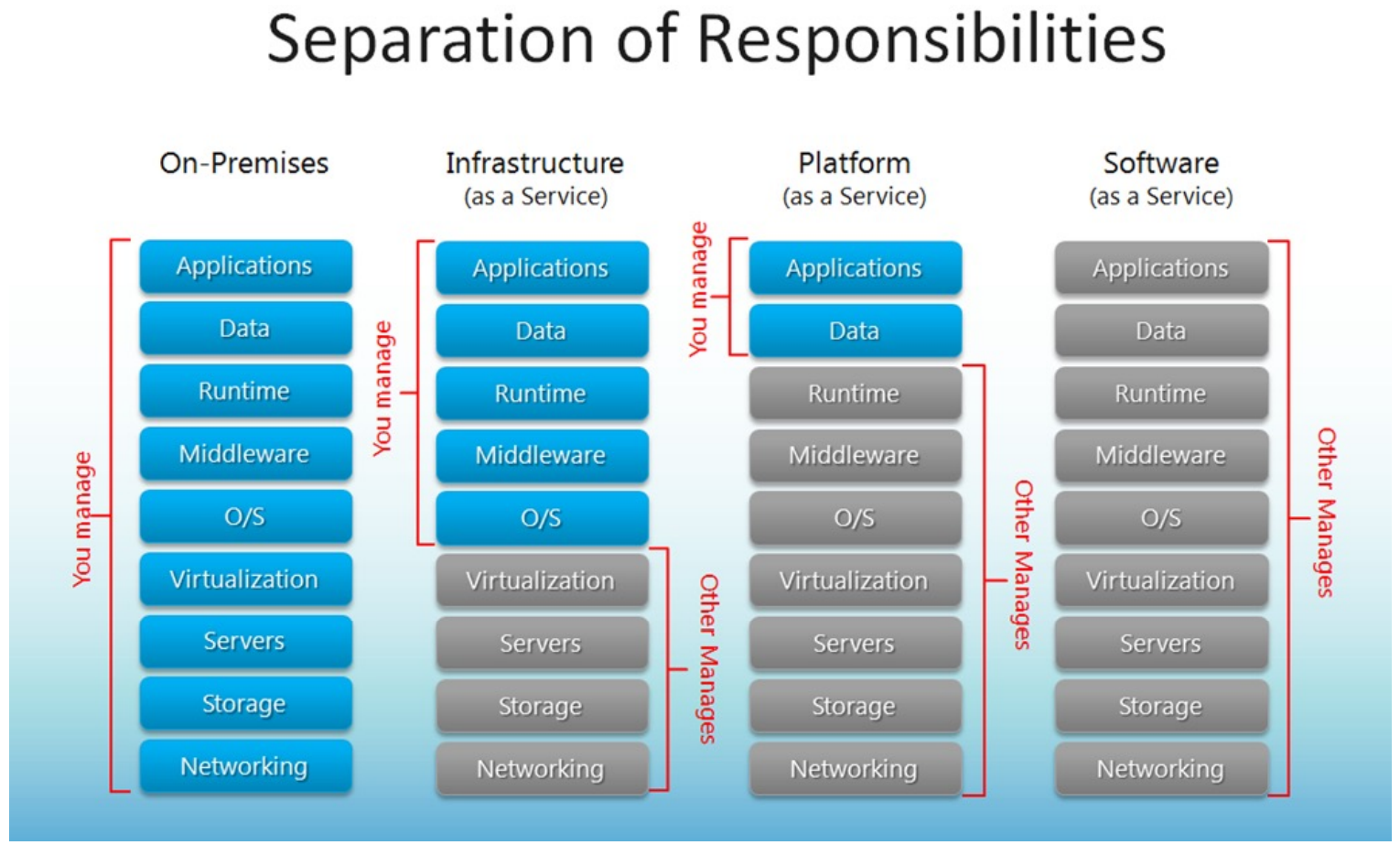 Machine Image: a stored image / template from which a new virtual machine can be launched

Instance: a running virtual machine based on some machine image

Volume: attachable Block Storage, which is the equivalent of a virtual disk drive

Question Applications can be deployed across Clouds either through creation and deployment of virtual images (snapshots) or through scripting the installation and configuration of software applications.用snapshot和script做部署有什么优劣

What are the benefits and drawbacks of these approaches?

How has the evolution of service-oriented architectures supported Cloud computing

difference of soap and rest

“Representational State Transfer (ReST) is intended to evoke an image of how a well-designed Web application behaves: a network of web pages (a virtual state-machine), where the user progresses through an application by selecting links (state transitions), resulting in the next page (representing the next state of the application) being transferred to the user and rendered for their use.”

A Tale of Two Clusters 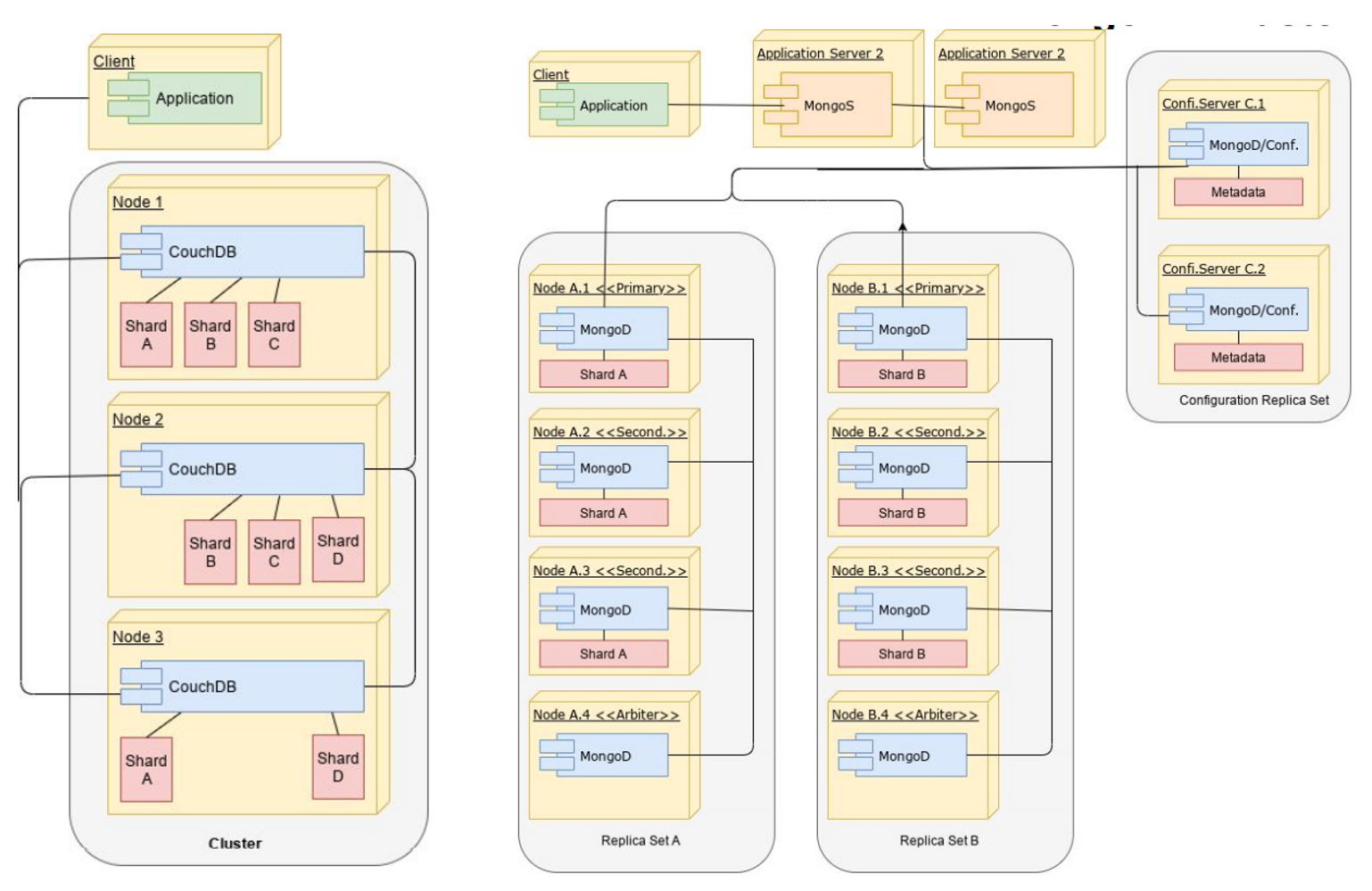 This is the usual algorithm used in relational DBMS’s (and MongoDB, to same extent), it enforces consistency by:

Why Blockchain does not Help Us

Why Document-oriented DBMS for Big data?

While Relational DBMSs are extremely good for ensuring consistency and availability, the normalization that lies at the heart of a relational database model implies fine-grained data, which are less conducive to partition-tolerance than coarse-grained data

Replica number:Number of copies of the same shard kept in the cluster

Number of shards:Number of “horizontal” partitions of a database

Read quorum:Minimum number of nodes that have to give the same result to a read operation for it to be declared valid and sent back to the client.

Write quorum: Minimum number of nodes that have to concur on a write operation for it to be accepted.

Why Using CouchDB in This Course?

What Happens When a Conflict Happens on a Cluster of CouchDB Nodes?

Actually, documents are not deleted until they are “purged”, hence they can be retrieved with a bit of effort (e.g. add document with the same id, then retrieve the old revision).

CouchDB has three mechanisms to select a set of documents that exhibit certain features:

Actually, documents are not deleted until they are “purged”, hence they can be retrieved with a bit of effort

A framework for analysing big data has to distribute both data and processing over many nodes, which implies:

Tools for big data analytics: majority of applications are built on top of an open-source framework: Apache Hadoop

HDFS blocks are much larger than blocks used by an ordinary file system (say, 4 KB versus 128MB), the reasons for this unusual size are:(hadoop的block文件更大，一般的是4k一个block，Hadoop的一个block有128m)

A HDFS file is a collection of blocks stored in datanodes, with metadata (such as the position of those blocks) that is stored in namenodes

HDFS achieve fault-tolerance fault tolerance in Hadoop HDFS was achieved by creating replicas. HDFS creates a replica of the data block and stores them on multiple machines (DataNode). The number of replicas created depends on the replication factor (by default 3). If any of the machines fails, the data block is accessible from the other machine containing the same copy of data. Hence there is no data loss due to replicas stored on different machines.

HDFS has blocks existing on nodes and there is a name node which contains the meta data about which block is running and if one of the nodes fails then the data is still available somewhere else in the system load balanced. And it will try to rebalnce itself. 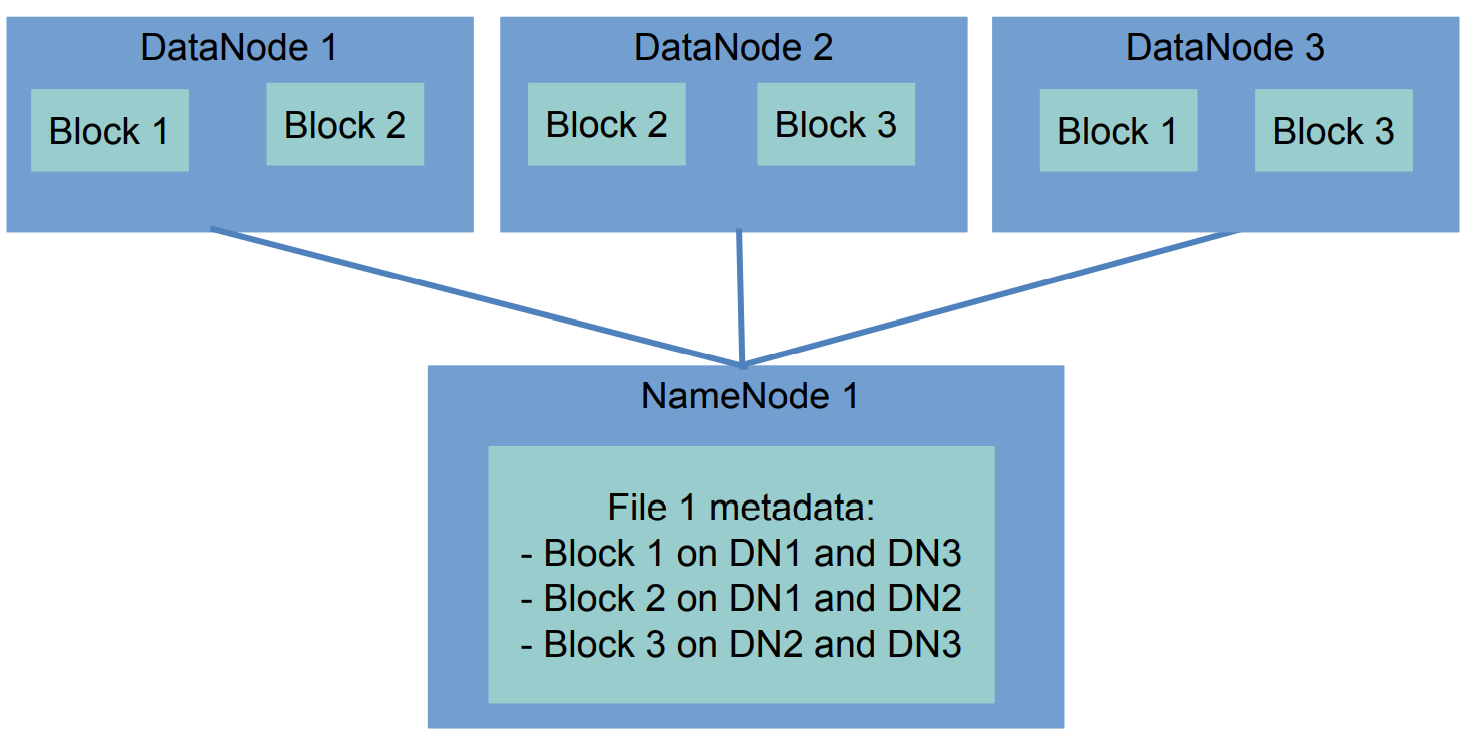 The main programming language to write MapReduce jobs on Hadoop is Java, but many other languages can be used via different APIs. Indeed any language that can read from standard input and write to standard output can be used. Practically, the hadoop command is used to load the program (with the -file option) and send it to the cluster, and the mapper and reducer are specified with the -mapper and -reducer options

The deployment mode is set in the Spark Context, which is also used to set the configuration of a Spark application, including the cluster it connects to in cluster mode.

Spark Contexts can also be used to tune the execution by setting the memory, or the number of executors to use.

Resilient Distributed Datasets (RDDs) are the way data are stored in Spark during computation, and understanding them is crucial to writing programs in Spark:spark在运算时数据存储方式

What Happens in a VM? 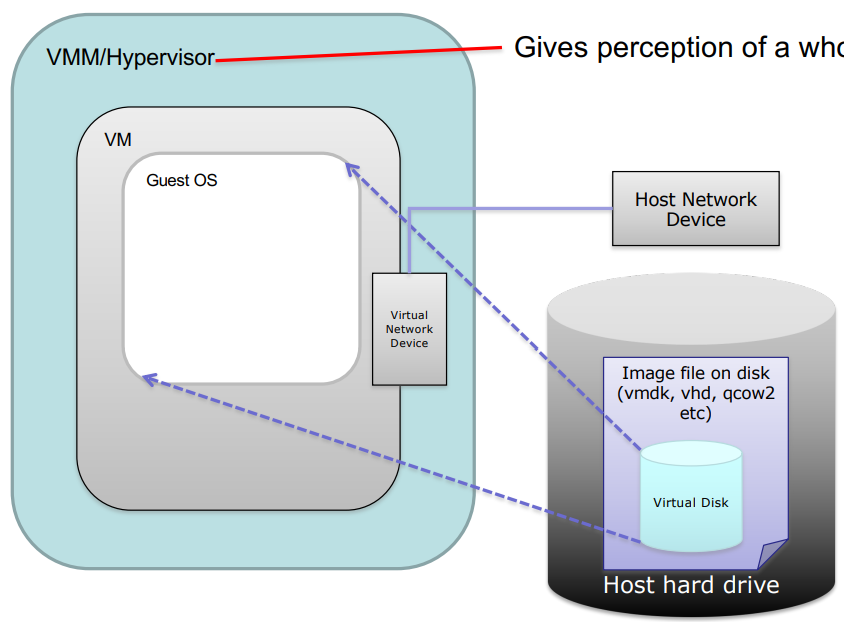 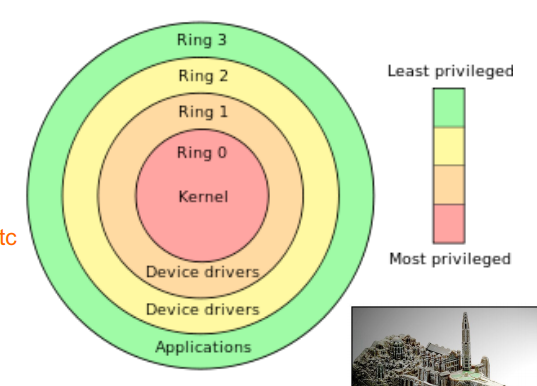 Unmodified guest OS to run in isolation by simulating full hardware (e.g. VMWare) Guest OS has no idea it is not on physical machine.不要改guestOS，效率低 Trap and execute occurs by scanning guest instruction stream and replacing sensitive instructions with emulated code (e.g. VMWare)(Don’t need hardware support, but can be much harder to achieve)不需要硬件支持但是难以达成 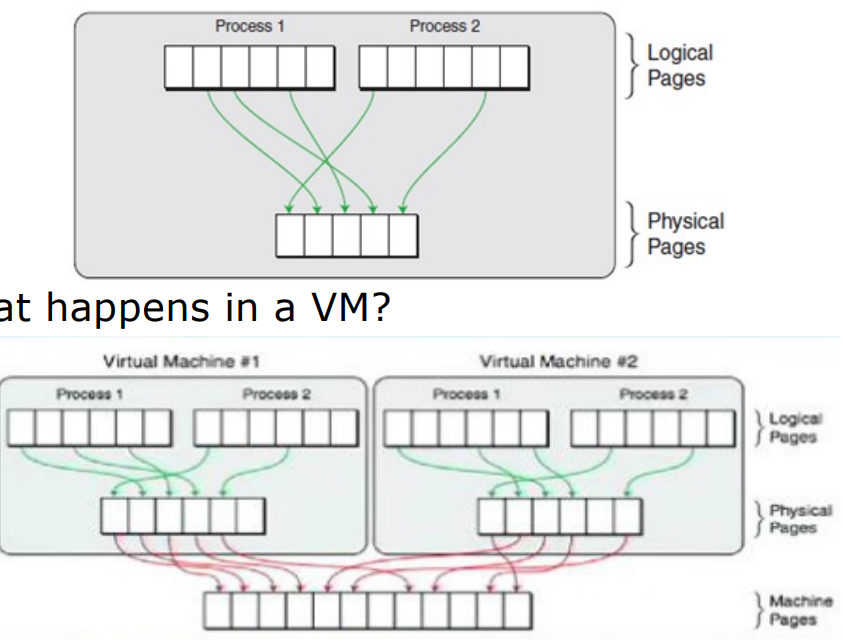 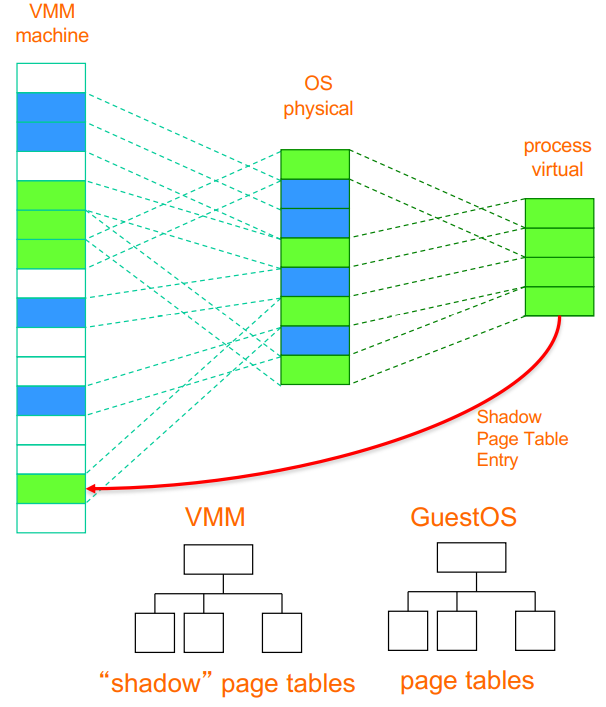 How hardware and software virtualization differ in treatment of shadow pages

Performance is a major advantage of hardware virtualization. The hypervisor maintains shadow page tables and having this approach adds additional management overheads. By addressing this in hardware, the performance issues of Guest OS memory to actual physical memory and the actual instruction sets that require paging can be tackled in a more performant manner. Imagine if every single call to memory had to get processed in software - there would be large amounts of overheads for any/all Guest OSs that would degrade the performance of anyone using the Cloud.

Steps：with a running VM, do check pointing of it, then start slowly copying all the parts of this VM to another.

好处：can have the continuity of the server, very few downtime 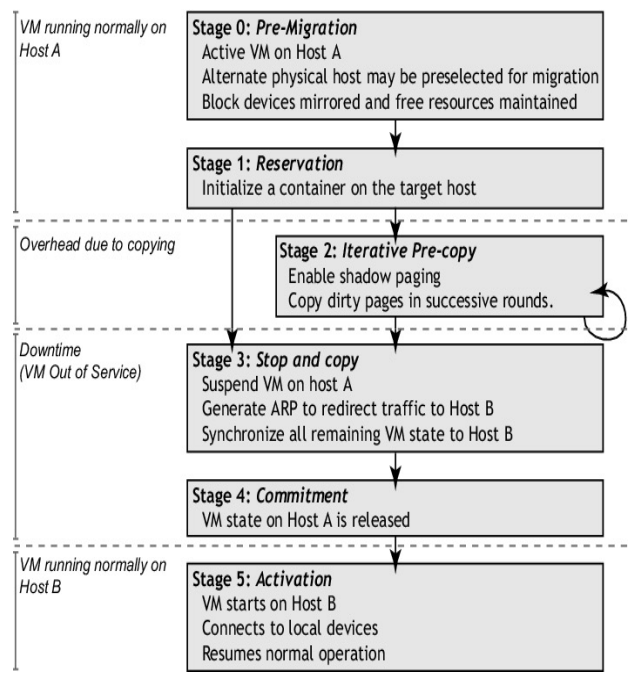 Container based solutions such as Docker have advantages and disadvantages compared to traditional Cloud-based virtualization solutions based upon hypervisors.

The many advantages of virtualization, such as application containment and horizontal scalability, come at a cost: resources. The guest OS and binaries can give rise to duplications between VMs wasting server processors, memory and disk space and limiting the number of VMs each server can support.

Containerization allows virtual instances to share a single host OS (and associated drivers, binaries, libraries) to reduce these wasted resources since each container only holds the application and related binaries. The rest are shared among the containers.

Two options for container to store file on host machine 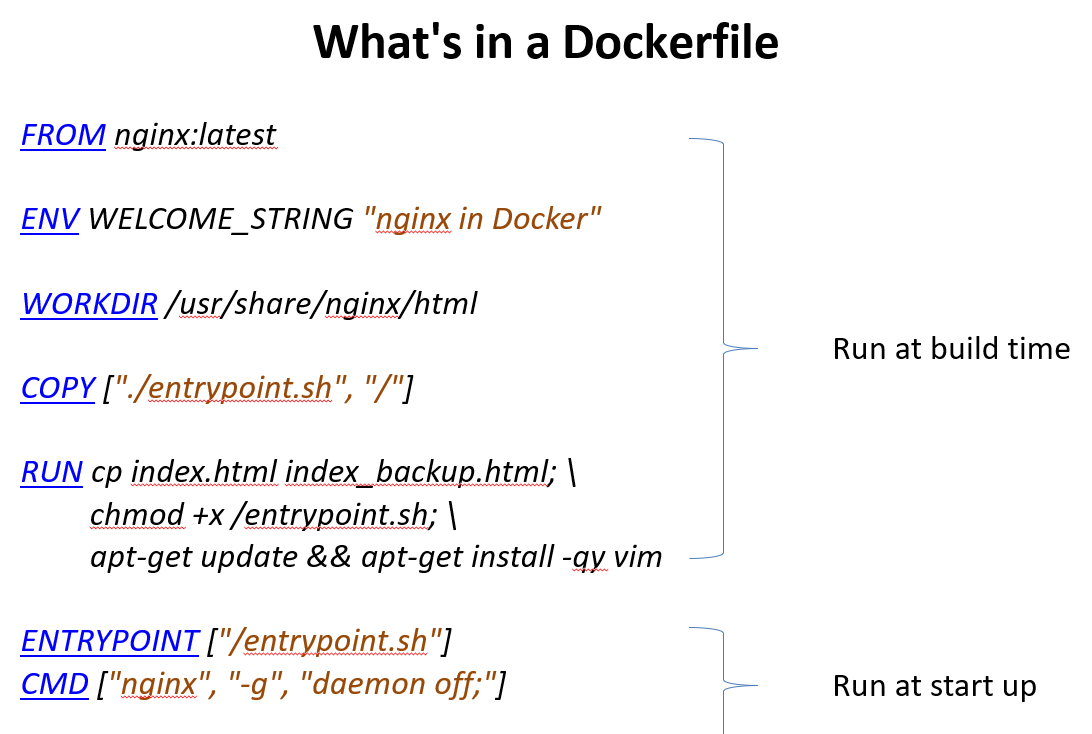 How to create an instance of virtual machine through a pre-existing snapshot from a non-public NeCTAR Cloud image?

Authenticate via Keystone; Explains role of APIs including Nova-comput. Nova-scheduler and Nova-conductor for looking up resources required via Swift/Glance and preparing the-VM on machine required and how Key identity used throughout.

What are the advantages and disadvantages of the Shibboleth approach for security?

Adv: 1. support single sign-on 2. It disperses the user management to the origin sites such that the payload sites don’t have to do it. 3. It supports group-base and role-base authorization via its attribute service

disAdv: static federation. If a user’s profile has changed, it will not be updated（1 The user is present and can answer questions during access to the web-resource.
2 The user agent can display an HTML form to the user and get a response.
3 The user agent can be redirected to a different URL.
4 The web resource is requested using the HTTP protocol.
5 The user agent accepts HTTP cookies.
6 Cookies carrying the authentication record are valid throughout the virtual organization.
7 The authors of the HS and SHIRE agree on the digital-signature method.
8 The authors of the SHIRE and SHAR agree on a communications mechanism.
9 The authors of the AA and SHAR agree on a communications mechanism.）